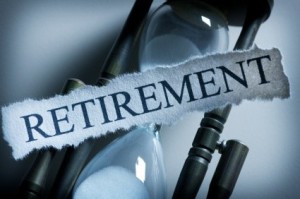 by Ryan W. Smith
Many Americans are on-pace to outlive their retirement savings, according to several surveys and studies of American retirement planning in the past few years. We’ve discussed this issue previously, from different angles, in this space. However, there is another additional facet of retirement savings that many Americans, including their financial advisors, might not be aware of: tax credits.
There are few times when the words “tax credits” and “retirement savings” co-exist, but there are two main tax credits that most eligible retirement savers just are not aware of which could put those investors further behind in their retirement saving.
1) Retirement Savings Contributions Credit
The Retirement Savings Contributions Credit is more well-known as the Saver’s Credit. This rule allows those saving for retirement to claim a percentage of their contributions to qualified retirement plans. Rollover amounts are not part of the $2,000 limit, which rises to $4,000 for those married and filing joint tax returns.
While many in the industry might dismiss this credit as something that middle income savers might not be eligible, data appears to show that income eligibility requirements are broad enough that almost half of tax payers could be eligible. It’s the fine print that significantly reduces the number of eligible filers for this credit.
Even the IRS appears to downplay this credit, labeling it as beneficial for “low and moderate income savers.” Translated from legal jargon, this label is not referring to working middle class Americans. Eligibility for this credit is based on Adjusted Gross Income (AGI) on a filer’s tax form. For those who file as single on their returns, the AGI limit for 2017 taxes is $31,000. For Head of Household filers, the limit is $46,500 in 2017 and for those who are married, filing jointly, the limit would be $62,000 in 2017.
One piece of fine print that reduces the eligibility pool for this credit quite dramatically is that to take the credit, filers must itemize their deductions. The most popular form field with the IRS is the 1040EZ, so anyone filing that form would not be eligible for the credit.
The TransAmerica Center for Retirement Studies says that roughly 30 million taxpayers could be eligible for the Saver’s Credit. However, in 2014, only 7.8 million taxpayers took advantage of the credit, leaving behind over 20 million eligible retirement savers.
For the many advisors attempting to gain traction with Millennial investors in order to win new business, this credit could come in handy since research shows that only one in three taxpayers eligible for the Saver’s Credit are even aware it exists.
2) Catch-Up Contributions
Catch-Up Contributions are another important tax-related retirement savings topic that many advisors often do not discuss with new or existing clients. It is another tool in the belt for advisors trying to win over Generation X investors who have proven thus far to be difficult clients to reel in.
Catch-Up Contributions were introduced in 2001. At that time, even the oldest Generation Xers were in their mid-30s and were not thinking about turning 50, the first year of eligibility for Catch-Up Contributions.
Most retirement savings are eligible for this tax credit, which can provide excellent benefits. For example, the 2016 Catch-Up limit was $6,000 for those savers who use 403(b), 457(b) and many 401(k) retirement plans. Simple 401(k) and IRA savers can only catch-up $3,000 in additional funds while IRA account holders can deposit an extra $1,000 to their plans.
403(b) account holders can also make additional contributions available to workers over age 50, provided they have been with the same employer for at least 15 years. Those who qualify can have up to $21,000 in elective deferral limits for tax year 2016, with small increases proposed for the 2017 tax year.
To illustrate the impact that taking advantage of these tax credits might have on a retirement portfolio, consider the chart below. Taking a very general, internationally diversified equities-based ETF investment approach yields surprising results.
As an example, take a long-established IRA account with a $100,000 portfolio value as of October 2004, only a few years before the individual owning the portfolio reached eligibility for Catch-up Contributions at age 50. Assume that the portfolio assets are in six of the largest equity ETFs, rebalanced each quarter, with all additional contributions invested with the same proportions as the base portfolio:
SPY (30%)
DIA (20%)
QQQ (15%)
IWM (20%)
FXI (5%)
EFA (10%)
In this hypothetical example, a $3,000 annual one-time IRA catch-up for an individual can yield an additional $50,000 in gains over a 10 year period. For a married couple catching up with their maximum $6,000 annual amount over the same ten-year period, the results are even more pronounced, with over $125,000 in additional account value. Note that the $6,000 married couple catch-up value is identical to the $6,000 individual catch-up limit for a 401(k) account, so the impact of catch-up contributions for 401(k) accounts would be even greater for married couples.
Please also note that this example does not factor in any additional contributions besides the catch-up contributions. Any regular contributions to the account would only further compound the portfolio value differences. 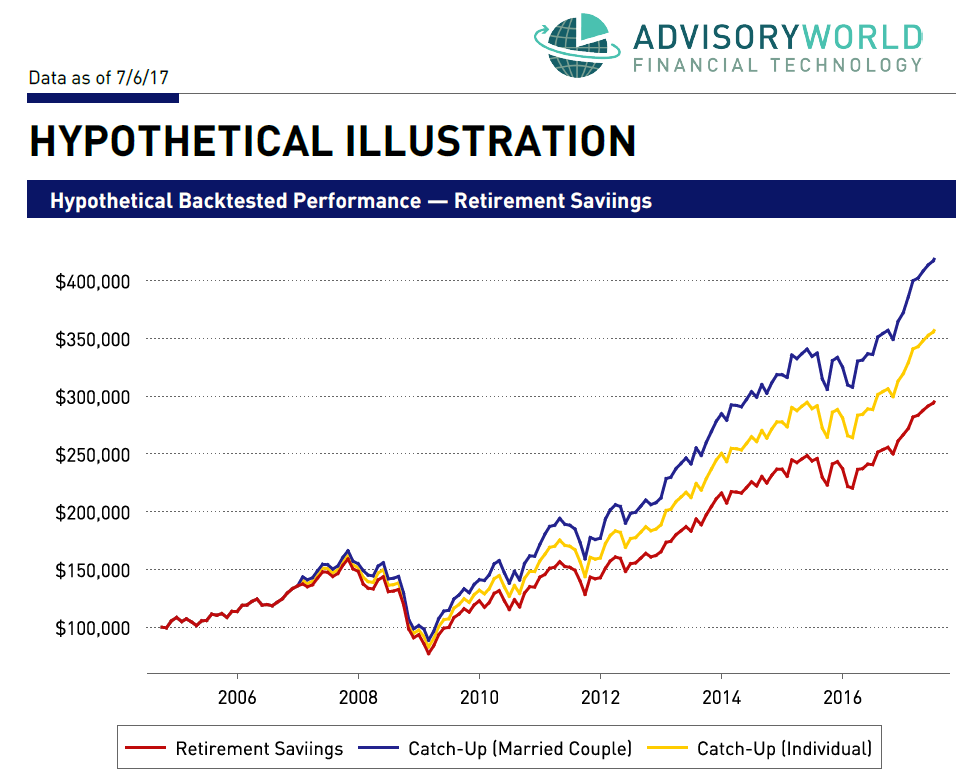 While many Americans are struggling with retirement savings, there are avenues available to assist those who are aware of their eligibility, with these two tax credits being among the most widely-missed opportunities. While the Saver’s Credit would impact yearly tax returns more than retirement accounts, unless the savings was invested back into those retirement accounts, the Catch-Up Contributions credit is one that can have a substantial long-term impact on a retirement portfolio. Those financial advisors who look at all methods to assist their clients in getting the most from available retirement savings might be surprised to find the number of eligible investors much higher than they might have originally anticipated. Those investors might also be pleasantly surprised by the numbers in their retirement accounts.