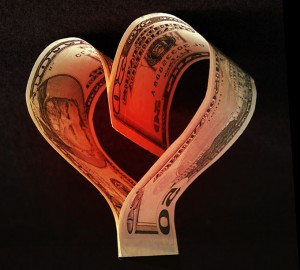 by Ryan W. Smith
Nearly all married couples argue about finances from time to time. In years past, disagreements about finances were cited in many studies as a primary reason for divorce. However, in recent years it appears this trend has dissipated greatly, at least according to a recent report from Ameriprise Financial. Finances are no longer a deal-breaker for many American couples with over three-quarters, 77%, of couples reporting they are on the “same page” with their finances.
In fact, seven in eight couples, 88%, told Ameriprise that they were happy with the division of financial responsibilities in their household, with 68% of couples saying they communicated well about finances with their spouse. Most couples also rated themselves as confident and engaged in managing their finances.
While other studies might cast doubt on Americans’ actual ability to manage money, Ameriprise’s report centered on communication within couples, not debt, savings, retirement preparation or financial acumen. 1,514 Heterosexual and same-sex couples, married or living together for more than six months, between the ages of 25 and 70 with more than $25,000 in investable assets, were interviewed for the survey by Artemis Strategy Group, on behalf of Ameriprise of Financial. One result of the research was clear: the happiest couples know how to work through their financial disagreements.
According to the report, the happiest couples have five main financial habits:
1) Priorities
More than 50% of surveyed couples said that money is an important factor in their relationship, while only 15% said finances were not important.
2) Goal Agreement
Nearly seven in ten couples, 68%, said their communication on financial matters was “very good” or “perfect,” according to the report. Further, 82% of couples have discussed retirement and said they have similar goals on their approach to saving for retirement and lifestyle expectations during their golden years.
3) Spending Limits
The vast majority of respondents, 66%, said that any major purchase, defined by those surveyed as $400 or more, needs to be discussed and agreed upon.
4) Shared Accounts, Shared Responsibilities
For couples with success in discussing financial matters, nearly all said that if one partner keeps money in a separate account, the other partner must be aware of that account. However, by and large most couples happy with their financial communication felt that joint finances like bank accounts, retirement or investment accounts, are a must.
5) Retirement for Two
Out of the 68% of respondents who said they communicated well about finances with their partner, 92% said that both partners agreed on their retirement savings target.
The study also looked at financial disagreements and their causes. While 82% of couples said they worked hard to quickly resolve financial disagreements, 31% said they argued about money at least once a month. The most common sources of disagreement, according to the study:
1) Major Purchases
34% of couples reported regular disagreements about major purchases.
2) Children
24% of couples with children said they regularly disagreed about financial decisions where their children were involved.
3) Partner Spending Habits
23% of couples said they regularly disagreed about how one partner was spending money.
4) Investment decisions
14% of couples in the survey said they regularly disagreed about important investment decisions.
Of the couples who disagree about finances, 40% said that a financial advisor helped them make financial decisions regarding sensitive subjects where tension might have otherwise been created. Even the happiest couples, those who were on the “same page” financially, told researchers that financial advisors, or other neutral third-parties, were particularly effective in helping the couple deal with financial disagreements.
Analytical tools like AdvisoryWorld’s SCANalytics data-analysis tool or the Advisor Proposal Generator can be of great assistance to financial advisors looking to assist clients with financial disagreements or miscommunication issues. Programs like these will allow for multiple scenarios to be shown side-by-side in the same report. This could greatly assist the couple by making the ramifications of their decisions a bit clearer to both parties, hopefully helping to deescalate tensions.
Researchers pointed to four strategies that couples can use to help improve communication about finances.
1) Discuss financial issues extensively before getting married or cohabitating
2) Agree, or at least come to a mutual understanding, of each partner’s role and responsibility to the couple’s finances.
3) Make investments and retirement goals a priority in the relationship
4) Use a joint financial advisor to tailor a plan specific to the couple’s financial reality and goals.
One key takeaway from the study that even the researchers didn’t seem to highlight is that 73% of respondents in this survey felt that their individual financial management style is dramatically different from their partner’s style. Yet, more than of the couples stated that their relationship has made them more financially responsible, with 54% also claiming that the role of money in their relationship has improved over time.
source:
https://www.ameriprise.com/retirement/insights/ameriprise-research-studies/couples-and-money-study/