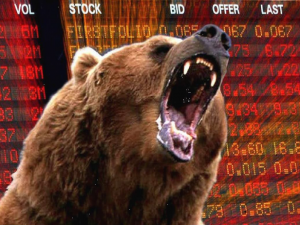 by Ryan W. Smith
All good things will eventually pass, an old saying goes. History has almost always agreed, but in recent years there has been a notable exception: the continual rise of the U.S. stock markets despite evidence to the contrary. While there is great debate on the relative merits of the bull market that won’t end, one thing is for sure: eventually it too, shall pass.
History also says that which has risen precipitously against the gravity of evidence will succumb to that evidence at some point. It is not prudent to try and call a top to any market, nor to suggest any variable or set of variables that will cause a fall, but it is practical to try and find a way to recognize, and prepare, for the eventual bear market when it arrives. Another old saying goes something like this: a hibernating bear does not wake up happy.
So when the inevitable arrives, when the bull finally dances out of the ring and the bear roars his mighty entrance, what are some ways that investors and advisors can protect their gains? Here are five things to pay close attention to:
1. Keep Perspective
Bear markets are part of a normally functioning market. Most analysts agree that a bear market is a 20% drop in prices in a short time frame, typically 3-6 months, whether it be for a single security or the market as a whole. This means that since 1929, when the bear roared loudest, there have been about 20 cycles fitting this description, about one every four to five years. The bear will always wake up and it will always be hungry.
2. Know Your Risk Appetite
One of the best ways to prepare for a bear market is to actually prepare. If an investor knows what her true risk appetite is when the weather is sunny, she will already have the necessary protection ready when the storms arrive. It can be very difficult to avoid an overextended exuberance when the market is hot, but the ability to hold back, look clearly at actual risk tolerance, and then act accordingly will save most investors a lot of the gains enjoyed during the good times. One of the least-talked about, but most important, aspects of investing is protecting gains.
3. Not all bears are equal
Some bear markets in the last 90 years have seen a steady, downward trend over a short period of time without large crashes. But these are not the norm. In fact, most studies have shown there is no “normal” bear market, much in the same way there is no “normal” bull market. There are traits, telltale signs that show a phenomena is occurring, but often it is like forecasting a hurricane because it is difficult to tell how severe the oncoming storm will actually be until it strikes. One trend that is inescapable is that the higher the market has risen in a short window, the higher the likelihood the downdraft will be sudden and forceful. Bear markets take years to reach their full destructive force.
4. Recoveries are unsteady
While initial gains after a crash are typically substantial, recoveries from bear markets often take considerable time. An example that stands out as an exception is very recent when the S&P 500 rose 69% from March 2009 to March 2010, in the aftermath of the Great Recession. By March 2011, prices had nearly doubled from their low. This represents the fastest recovery from a bear market in the last 90 years, an atypical response to an atypical situation. It is important to note, however, that even strong recoveries have false breakouts and breakdowns as well. A drop of 16% in mid-2010 and 19% in mid-2011 led many to doubt the markets recovery and to miss the considerable upside that followed.
5. Prepare for the next bull
Before a bear market roars its presence, a prudent investor can already be preparing for the next recovery. By testing the downside of current allocations against recent bear markets, a proper mixture of stocks and bonds can be found to match overall risk tolerance. One way to perform this test is to take the portfolio mix, say a 70-30 stock-bond portfolio, and apply the previous bear’s losses to it.
For example, the S&P 500 lost 37% in 2008, while fixed income properties rose 5% during the same period. A 70-30 mix of stocks and bonds, respectively, would have lost about 25% in that situation (.70*.37+.30*.05=-.244 or -24.4%). A 50-50 mix would have lost about 15% using the same calculation. Determining what a worst case scenario might be, planning for it and executing countermeasures according to risk tolerance is key to minimizing the damage during the storm, but also being ready to set sail again when the storm subsides.
It is impossible to know when a bear market will awaken, or what the triggers might be, but with prudent strategies in place while times are still good, it is fully possible to both minimize the damage during the storm while also making sure to join in the recovery as soon as the skies clear.
The bear will awaken, but the bear will also go back to sleep. Eventually.